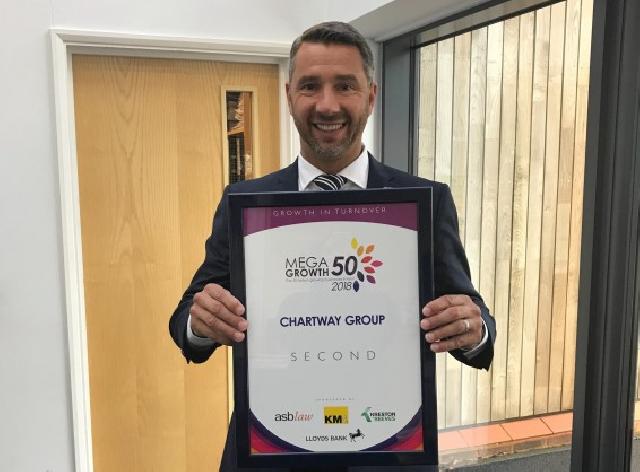 Chartway Group has been named for the fifth time in the KM MegaGrowth 50 report.  Published by the Kent Messenger Group, the report celebrates Kent’s fastest-growing and most dynamic private businesses.

The company took second place in the list, which was ranked by increase in turnover. Companies need to show consistent revenue growth over the last three years and significantly outperform their industry peers.

Chartway Group has seen unprecedented growth since it was founded in 2009, having three times appeared in The Sunday Times Virgin Fast Track 100 league table, which ranks Britain’s private companies with the fastest-growing sales, as well as gaining its third appearance in the London Stock Exchange 1000 Companies to Inspire Britain Report.

The privately-owned group employs around 200 staff from its base in Coxheath Kent, delivering an annual turnover of £90million.

Ian Savage, Co-Founder and CEO at Chartway Group, said: “Turnover for the end of our financial year in May is around the £90m mark and next year we’re looking at that being closer to £100m.  But we’re not looking to expand a lot more – it’s more about consolidation.  We’re 10 years old next year, and we’ve made some solid growth over that time.”

Providing services in both the private residential housing market through its Westerhill Homes brand and one-stop construction service to clients, including housing associations and private developers, Chartway Group has built in excess of 500 homes in the last year – 90% of which will be affordable.

A raft of deals has contributed to the company’s strong growth, including a lakeside village under development at Conningbrook Country Park in Ashford, the regeneration of key plots in Rochester’s Corporation Street, the redevelopment of the former Ashford College site and a recently launched site at Peters Village in Wouldham, Kent.

Savage added: “This is the fifth time that Chartway Group has been included in this report, an accolade we are rightly very proud of.  A fantastic acknowledgement of the company’s achievements since its launch just nine years ago.  In a very competitive sector, the company’s growth and performance has continued to go from strength to strength, which can only be delivered by working with a great team and by delivering a market-leading service and proposition to our clients.”